Why Choose To Move Towards District Elections Now?
The City of South Pasadena received a letter from the law firm of Shenkman & Hughes on June 5, 2017, alleging the City is violating the California Voting Rights Act (CVRA) because City Councilmembers are elected at-large rather than by-district. Dozens of local governments in California have faced similar legal challenges in recent years.

What's The Difference Between At-Large and District-Based Elections?
South Pasadena has always had an at-large election system, where voters of the entire city elect all members of the City Council. District elections will divide the city into geographic sections. Voters within said section (district) will vote only for candidates residing within the same district. Voters will not vote for candidates outside of their own district. 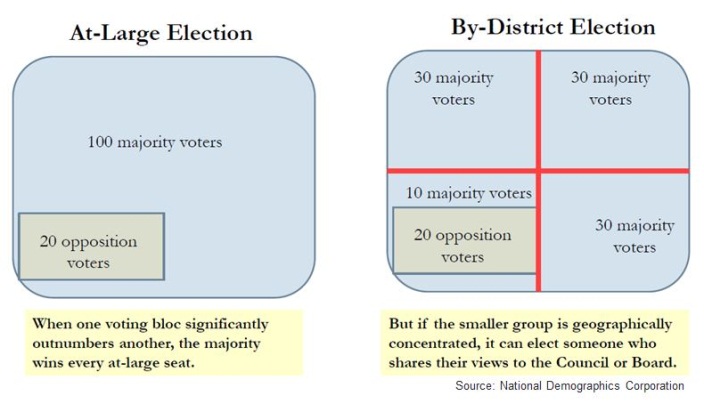 How Are District Elections Designed To Benefit Voters?
District elections are intended to allow groups of concentrated opposition voters to elect, or otherwise influence, candidates of their choice. However, the desired outcome may not be achieved if the opposition voters reside relatively evenly throughout a city. Please click here for an enlarged graphic of at-large versus district elections.

What Have Other Cities Done When Facing Threats Of Litigation?
Almost without exception, other cities have either voluntarily, or been forced to adopt changes to their method of electing City Councilmembers. Many have settled out of court by ultimately agreeing to shift to district elections. Others have defended challenges through the courts. Those agencies that have attempted to defend their existing at-large electoral system in court have incurred significant legal costs because the CVRA gives plaintiffs the right to recover attorney's fees, but denies a city's ability to be reimbursed for its attorney's fees even if prevailing. A few examples:
Why Haven't Cities Prevailed In Challenging These Allegations?
Under the Federal Voting Rights Act (FVRA) plaintiffs must prove the existence of three specific conditions to assert a violation. In addition, the Court will weight the totality of circumstances to determine if the votes of minority voters are diluted. However, the CVRA eliminates most of these "preconditions" as well as consideration of the totality of circumstances. This results in an extremely light burden on the plaintiff to establish a CVRA violation.

What Are "Communities of Interest"?
A "community of interest" is a neighborhood or community that would benefit from being in the same district because of shared interest, views, or characteristics. Possible community features include:
Who Creates The District Maps?
Professional demographers are hired by cities to create proposed district boundaries. These demographers ensure that the proposed maps comply with FVRA and CVRA requirements as well as consider the feedback received from the community during the Public Hearing process.

Is Avoidance Of Incumbent Head-to-Head Contests A Legitimate Criteria When Drafting District Boundaries?

Yes, avoidance is of head-to-head contest is a common criteria in the "other category" that a City Council may instruct staff (and/or consultant) to consider while drafting district boundaries. However, this would be considered secondary to those criteria prescribed by federal and state law. In addition, application of this criteria would only be to the extent that is feasible and reasonable. Other cities that have considered avoidance of head-to-head contests are Glendora, Santa Maria, Jurupa Valley, Fremont, and among others.

Shouldn't This Go To The Voters For Approval?
Unfortunately, cities facing allegation of violating the CVRA could still be subject to litigation even if it submits the question of whether to switch to district elections to the voters. Even if the voters ultimately oppose switching to district elections, cities would remain vulnerable to accusations that the election resulted in polarized-voting in violation of the CVRA. Therefore, City Councils must decide whether to follow the procedures under Elections Code Section 10010 or to defend its at-large election system in court.

I Heard Other Cities Have Refused To Switch, What's Different Over There?
Every city has its own set of circumstances including whether its a Charter city, demographic make-up, budgetary considerations, and other factors which may support a decision to attempt to keep at-large elections. One significant difference being whether a city is a Charter or a General Law city. Charter cities may argue that elections are a "municipal affair" and that the CVRA does not apply. However, South Pasadena is a General Law city and subject to the CVRA.