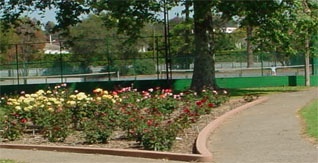 The parks and recreational facilities within the City of South Pasadena are valued and highly regarded by South Pasadena’s citizens. Community parks provide open space and a place to go for active recreation or passive enjoyment of the outdoors.

The park is divided into three sections: The upper section includes three lighted sports fields with backstops, parking and a small concession/storage building, and it is utilized regularly by the local Little League, American Youth Soccer Organization and softball leagues.

The center portion of the park includes: group picnic shelter, tables, barbecue, a playground, storage building and a small amphitheater.

Both the upper and lower parts of the park are utilized for soccer during the fall season.

An equestrian/hiking trail is on the south and west perimeter of the park connecting to the Arroyo Park.

The two story Eddie House and grounds were donated to the City by the Eddie family. The 2,200 square foot building is an example of Transitional Craftsman architecture. Only the first floor is utilized as a meeting place for various groups and programs that include: Girl Scouts and Boy Scouts.

The War Memorial building was built in 1921 and is identified as a city cultural heritage landmark. The building was built on the former Oak Lawn Park with funding from city bonds and donations from the American Legion. The upper floor of the building includes a kitchen and a large multi-purpose room for dancing, meetings, banquets and other activities for groups up to 200 people. The lower consists of smaller rooms, storage and restroom facilities.

The grounds north of the building are dedicated for a landscaped memorial garden.

Orange Grove Park has a two-story 9,500 square feet recreation building. The first floor of the building is used for recreation and day care programs. It is also equipped with a restroom accessible from outside of the building. The second floor serves as meeting space.  Other park amenities include: drinking fountains, picnic tables, bleachers, and a bicycle rack.

The park landscape consists of mature trees, mounded grass areas and meandering walkways. Library Park is a passive neighborhood park which reflects the low key activities and functions of the Library and the Senior Center. The Senior Center consists of 800 square feet of space with a separate entrance on the north side of the library building.

On the south side of the Library, there are four benches, two bicycle racks and trash receptacles. The grassy mounds are favorite places to read and relax. Programs and activities at Library Park are primarily related to the Library and Senior Center functions.


Arroyo Woodland and Wildlife Nature Park
(Pasadena Ave. before York Blvd. Bridge)
(Map)
This three acre park includes meandering trails among rarely see native California Walnut trees. The Woodland and Wildlife Park Trail begins at the park entrance and continues along the east side of the Arroyo Seco in South Pasadena. A lookout point located in the center of the park offers views of the historical York Boulevard Bridge, Mount Washington, the Verdugo Mountains, and the San Gabriel Mountains.

The City seeks to strike a balance between accommodating growth, providing recreational relief and developed open space amenities for residents, and conserving the natural environment as an exercise of responsible stewardship.

The Arroyo Seco: The Lower Arroyo Seco provides not only opportunities for recreation, but also the potential for a wildlife ecosystem within city limits.

The city strives to develop recreational opportunities while protecting and restoring the ecosystem, and recognizing the important flood control functions of the area.

Along the northeast and east sides of town, the former creek, now flood channel defines the city boundary and, though traversing residential fabric, it is in certain portions an already established riparian and wildlife corridor.

Hillside areas: The hillsides and ridgelines of South Pasadena provide a scenic backdrop for the entire community. Because of the view, potential ridgelines are often the first choice of developers to locate homes. Protection of the City’s hillside areas is a matter of ensuring that development minimizes severe alteration of landform, flood problems, soil erosion, and slide damage. It is also a matter of protecting the “view-shed”, both from and to these hillsides, and retaining as much natural vegetation as possible

External links are being provided as a convenience and for informational purposes only; they do not constitute an endorsement or an approval by the City of South Pasadena of any of the products, services or opinions of the corporation or organization or individual. The City of South Pasadena bears no responsibility for the accuracy, legality, or content of the external site or for that of subsequent links. Contact the external site for answers to questions regarding its content.