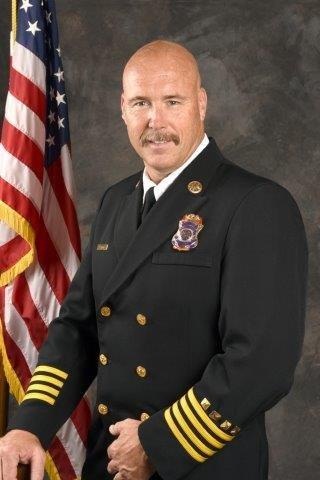 On July 24, 2017, Deputy Chief Paul Riddle was appointed as the City of South Pasadena’s Fire Chief, making Chief Riddle the 17th Fire Chief in the 110-year history of the Department.   His appointment followed the City Council’s approval of a new, Two City Cooperative Fire Services Agreement with the City of San Marino.

Chief Riddle was born and raised in West Covina, California. His father was a Firefighter for Pasadena Fire Department and his older brother currently works as a Firefighter for the City of Seattle.  Chief Riddle started his career in the fire service in 1991 as a Volunteer Firefighter with the City of South Pasadena.  He was brought on as a full-time Firefighter in July of 1992. He has served the South Pasadena Fire Department as an Engineer, Captain, Battalion Chief, and in 2014 was promoted to Deputy Fire Chief.  As the Deputy Fire Chief, he was in charge of training for the Cities of South Pasadena, San Marino, and San Gabriel Fire Departments as part of Verdugo Cities Fire.  He has also held the positions of Department Training Officer, Safety Officer, Emergency Manager, and Fitness Coordinator.  He has a Bachelor's Degree in Management as well as an Associate Degree in Science in Fire Technology from Mt. San Antonio College.

Additionally, on Wednesday, July 19th, the City Council approved an agreement with the City of San Marino for the sharing of Fire Command Staff.  The agreement identifies each City having its own Fire Chief and Division Chief. The remaining Division Chief will be identified as the Shared Command Position. Each City will be responsible for 50% of the mutually agreed upon shared cost of services for the Shared Command Position. The agreement will allow each City to continue providing the highest level of customer service to the communities at a reduced cost.