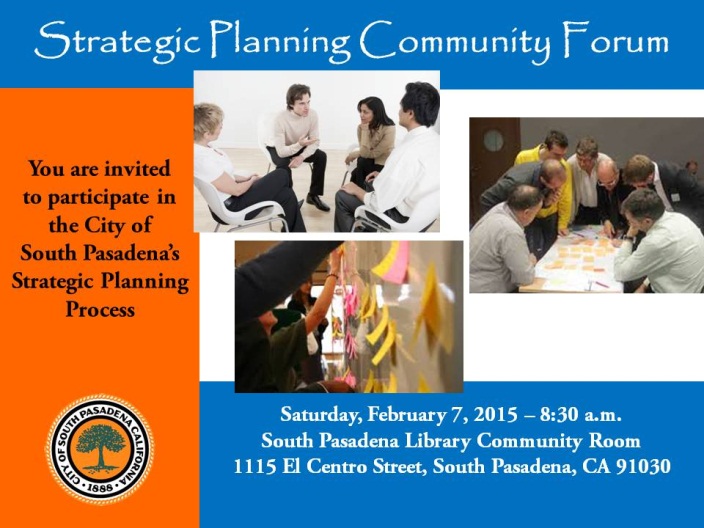 On Saturday, February 7, 2015 over 75 community members attended the City of South Pasadena Strategic Planning Community Forum at the Library Community Room. During the event, residents and community members found multiple commonalities and responded to the program with overwhelmingly positive support.

The Community Forum consisted of two-parts. In the first portion, members of the public learned about the City's major functions, programs and accomplishments in the FY 2014-15 Strategic Plan. In the second part of the event, participants brainstormed "big-picture ideas" for the City to focus on in FY 2015-16. The discussions focused largely around a handful of issues including transportation and traffic, community amenities such as the City’s proposed Community Center, and concerns surrounding land use and economic development.

Resident feedback received on the Community Forum program was overwhelmingly positive. Prior to the conclusion of the program, participants were asked to complete a survey on the event, and provided the following comments:

“It was great to be able to participate and connect with so many people from the Community.”

“The interactive breakaways were an excellent idea.”

“The brainstorming session was well organized and moderated. Strong, consistent ideas were brought to the Council.”

“The elected officials and City staff are genuinely interested in what the people who live here want, need, and care about.”

If you have any questions concerning the FY 2015-16 Strategic Planning process, please contact the Management Services Department at (626) 403-7210 or cmoffice@southpasadenaca.gov.