The 2016 Amgen Tour of California, presented by AEG, will be coming to South Pasadena. The City of South Pasadena has been selected as the host city for the start of Stage 2. Join us on Monday, May 16, 2016, on Mission Street, between Meridian Avenue and Fremont Avenue, to watch the start of Stage 2 which ends in Santa Clarita. The Amgen Tour of California is the most internationally respected and esteemed stage race in the U.S. and one of the largest sporting events in the country. The festivities will start in the morning around 9:00 am and will go on till 12:30 pm.
The start of stage 2 will be in the Mission Street Historic District and will go west on Mission Street then making a right and heading north on Arroyo Drive and into the City of Pasadena. We encourage you to plan your day according to the road closure times (see below). Consider the opportunity to join the community at the main event area in the Mission Street Historic District. Join us in watching and welcoming international cyclist from around the world as they race for the championship. For route details see below.
This great event wouldn't be possible without the support of our local sponsors:
Platinum Sponsor: City of Hope

The 2016 Amgen Tour of California will kick off this spring in the heart of San Diego for the first time in its 11-year history and conclude in Sacramento, the first time the state capital will host the overall race finish. Competing across nearly 800 miles of quintessential California terrain from May 15-22, the course will lead World Champions, Olympic Medalists, top Tour de France competitors and other elite professional cyclists south to north for only the second time since the race began in 2006. To find out more about who will be competing at the 2016 Amgen Tour of California go to www.amgentourofcalifornia.com/competition/mens-teams.
Traffic Information

Local Traffic will be impacted please plan ahead. The race route will have rolling street closures that will affect local traffic for approximately an hour minutes between 11:30 AM and 12:30 PM.
There will be street closures related to the start gate and event festivities that will be longer in duration, starting from 2:00 PM, Sunday, May 15, 2016 to 5:00 PM, Monday, May 16, 2016.

START: Monday, May 16, 2016 at 8:00 AM
END: Monday, May 16, 2016 1:00 PM
Route
The Start of Stage 2 will be in the Mission Street Historic District and will go west on Mission Street then making a right and heading north on Arroyo Drive and into the City of Pasadena. The entire Route of Stage 2 start in South Pasadena and end in the City of Santa Clarita.
South Pasadena section of Stage 2 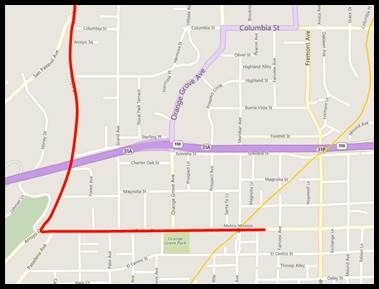 Volunteer
To put on an event of this size volunteers are needed. Please volunteer to help the City of South Pasadena put on the best event possible. Its a great way to be a part of the 2016 Amgen Tour of California and be a part of history.
For more information and to sign up to be a volunteer go to www.amgentourofcalifornia.com/volunteer

About Amgen
Amgen is committed to unlocking the potential of biology for patients suffering from serious illnesses by discovering, developing, manufacturing and delivering innovative human therapeutics. This approach begins by using tools like advanced human genetics to unravel the complexities of disease and understand the fundamentals of human biology.

Amgen focuses on areas of high unmet medical need and leverages its biologics manufacturing expertise to strive for solutions that improve health outcomes and dramatically improve people’s lives. A biotechnology pioneer since 1980, Amgen has grown to be one of the world’s leading independent biotechnology companies, has reached millions of patients around the world and is developing a pipeline of medicines with breakaway potential.

About AEG
Founder and operators of the Amgen Tour of California, AEG is one of the leading sports and entertainment presenters in the world. AEG, a wholly owned subsidiary of The Anschutz Company, owns or controls a collection of companies including facilities such as STAPLES Center, StubHub Center, Sprint Center, The O2, Mercedes-Benz Arena, Microsoft Theater, L.A. LIVE and PlayStation Theater; sports franchises including the LA Kings (NHL), two Major League Soccer franchises, two hockey franchises operated in Europe, management of privately held shares of the Los Angeles Lakers; AEG Live, the organization’s live-entertainment division, is a collection of companies dedicated to all aspects of live contemporary music performance, touring and a variety of programming and multi-media production. For more information, visit AEG today at www.aegworldwide.com.