In early 1874, the area that is now South Pasadena was a part of the San Gabriel-Orange Grove Association. In 1875, the stockholders of the association voted to name their town Pasadena and just three years later, residents living in the southern portion of Pasadena considered themselves South Pasadenans. 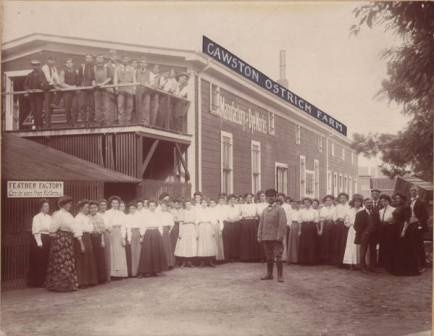 control their own territory, South Pasadenans voted eighty-five to twenty-five for incorporation. A board of trustees was elected and Ammon B. Cobb was appointed as the first marshal, with Marshal B. Selmen as his deputy.

On March 2, 1888, South Pasadena officially incorporated with a population of slightly over 500. The City’s boundaries established in 1889 are essentially the same today. South Pasadena consists of 3.44 square miles of prime residential property. In 1876, unimproved land with water was selling from $75 to $150 an acre. Today a vacant lot in South Pasadena can be sold for more than $200,000.

Few cities in California are better recognized for the quality of its small-town atmosphere and rich legacy of intact late 19th and early 20th century neighborhoods and residences. South Pasadena also has a strong claim to having the oldest and most historic sites in the San Gabriel Valley. For many centuries, its adjacency to a natural fording place along the Arroyo Seco had served as a gateway to travel and commerce for aboriginal peoples here and along the coast. It was here that Hahamognas greeted Portola and the missionaries who later established the San Gabriel Mission a few miles to the west.

The initial buildings on the Rancho San Pascual, which subsequently gave birth to the Cities of Pasadena, South Pasadena and Altadena, were built here. The first of these adobe structures became headquarters for General Flores and his staff in 1847 where they agreed to surrender to American forces, ending Mexican Colonial rule in California.

In 1888, South Pasadena incorporated the southern portion of the Indiana Colony and land south and eastward to the Los Angeles border, becoming the sixth municipality in Los Angeles County. With establishment of the Raymond Hotel and the Cawston Ostrich Farm, the small community was able to attract tourists and increasingly large waves of new residents to the Pasadena area in the late 19th and early 20th Centuries. With completion of the Pacific Electric Short Line, putting the entire city within easy walking distance of the “red car” stations, South Pasadena also became a one of the first suburbs of Los Angeles. It is now certainly one of the best-preserved cities, maintaining a small-town quality and humanity in the scale of its buildings, its residential streetscapes and historic commercial core.